NAIROBI, Kenya, Jan. 26, 2022 /PRNewswire/ — Scooper, a news app developed by Transsion Group, joined Kenya’s media space in 2017 as an independent firm aimed at distributing impartial and current news in the country. Until now, Scooper news has an audience of over 600K Daily active users in Kenya.

The year 2021 came to an end, and Scooper news rounded up some interesting things by using its large database to analyze all the content which were published in Scooper news in the last year, making this is a must-see report for Kenyans.

The past year has had its own fair share of hard hitting headlines. Politics has been major player in the Kenyan media waves, owing to the upcoming general elections on August, 2022. That explains why the word ‘President’ topped the “Words of the Year” list. The most popular word outside politics was ‘Party’, giving the notion that Kenyans like their social events.

Amongst other popular celebrities was Meagan Markle, who topped the list of our ‘Top 8 Celebrities’. Other celebrities on the list were Kanye West and Princess Diana, with Diamond, Davido and Wizkid been the only celebrities from Africa.

3. Emoji of the year

The laughing emoji was also voted as the ‘Emoji of the Year’, owing to the fact that most of our content is entertaining and humorous. 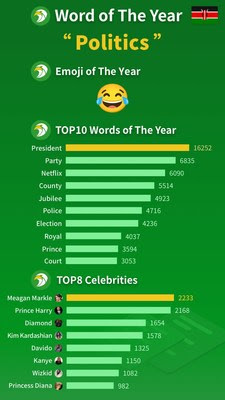 Scooper spends about $100,000 on PGC writer’s annually as salary payment, and about $200,000 annually on in-house writers and media partners.

Freelancers can earn money by registering an account in Scooper news and publishing content to get income. In the last year, the TOP10 Writers in Kenya earned a total income of 1,200,000Ksh in 2021!

Also, Scooper has partnered with more than 30 top-notch media houses, and enrolled hundreds of PGC writers to ensure that its audience is always informed the latest news and so much more.

We also had our own fair share of fake news that we averted thanks to our avid research skills and trained Journalists.

6. The Top10 Hottest news in Kenya

Based on our statistics, the Top10 news headlines in Kenya were:

TOP1: Jeff Koinange Owns Expensive Things, Check Out Some Of Them

TOP2: Ovahimba: Inside The Community That Offered S_x To Visitors And Didn’t Bath

TOP3: Age Is Just A Number! Meet Kenyan Men Celebrities Who Have Married Older Women Than Them

TOP4 : Kikuyu LADIES in tears as one of the most handsome Kikuyu radio presenters weds his beautiful girlfriend

TOP7: Ndio Hizi! Illuminati Schools In Kenya As Shocking Things Students Are Forced To Do Emerge

TOP8: Remember Ruto’s Daughter Who Was Buried Alive? See How She Has Transformed, Her Heartbreaking Story 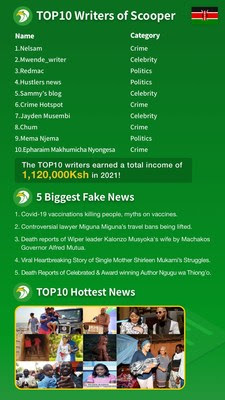 Scooper is a news app developed by Transsion Group bringing you the latest content in Kenya and around the globe. Up to 2021, Scooper has employed more than 2000 PGC writers through its free-lance program that was tailored to provide job opportunities to the Kenyan population.